Automatic segmentation and classification of movement trajectories for transportation modes


A thesis submitted to the Delft University of Technology in partial fulfilment of the requirements for the degree Master of Science in Geomatics. 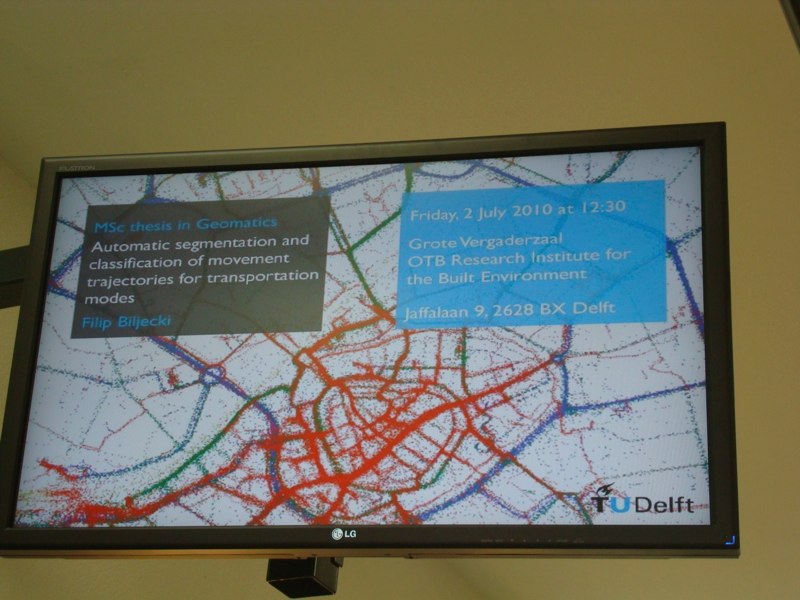 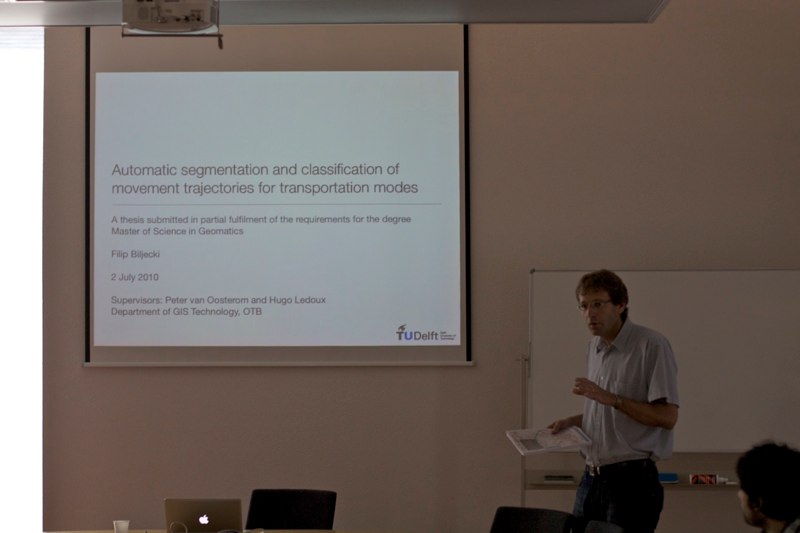 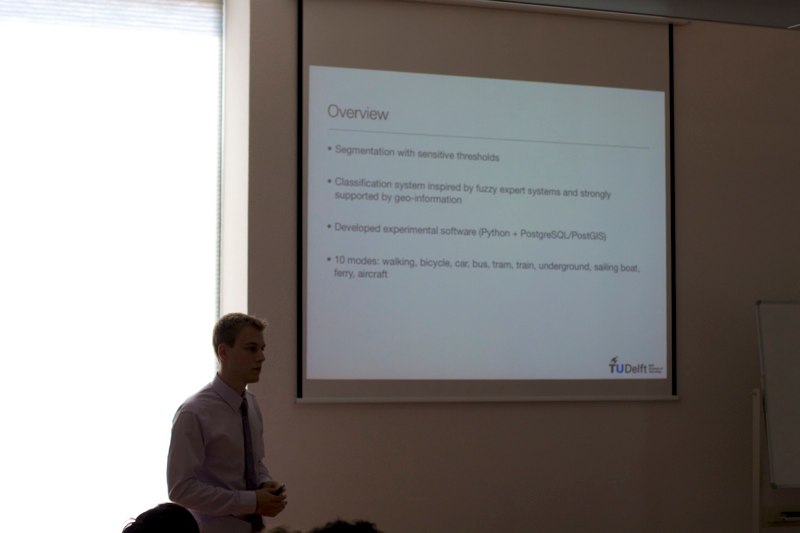 The objective was to develop a method which automatically segments and classifies movement trajectories (i.e. GPS traces) for ten different transportation modes (car, foot, bicycle, train, etc.). The developed method relies on the use of an extensible fuzzy expert system, and it uses OpenStreetMap to find relations between the trajectories and mode-related geographic information (e.g. railway tracks, bus stops, roads) to facilitate the classification.
The main data source of the trajectories is the Section Urban and Regional Development at the same department, which acquired the vast data in the scope of a research project. The data contain trajectories of total length of over 500 000 km with over 16 million sampled GPS points.
The built prototype can be used to segment and classify any movement data acquired in any country in any timeframe and sampling period.

The abstract of the thesis can be found here.

The knowledge of the transportation mode used in a movement trajectory (derived in form of timestamped positions) is critical for applications such as travel behaviour studies. This thesis presents a method for segmenting movement data into single-mode segments and their classification with respect to the used transportation mode.
The method relies on concepts found in expert systems, most notably membership functions, fuzzy logic, and certainty factors. A prototype, which may serve as a framework for managing travel behaviour surveys has been built in order to validate the presented theories and to classify the available test dataset. The transportation modes that this system classifies are walking, bicycle, tram, car, bus, train, underground, sailing boat, ferry, and aircraft.
This research also investigates the performance of OpenStreetMap data in solving this problem. This free source of geodata proved to be crucial for the classification, where the ten transportation modes are discerned with various indicators mostly derived from the geodata, for instance, the proximity of the trajectory to the tram network and the information whether the movement has been made on a water surface or not. The classification relies on eliminating unlikely transportation modes by values set with a number of empirically derived fuzzy membership functions, and by using the selected combination of indicators it is possible to distinguish in between transportation modes which exhibit a similar behaviour (e.g. a car and bus in urban areas). Finally, the classification results are attached with a certainty value. The results are supplemented with additional mode-related information, e.g. the name of the departure train station.
The segmentation has been done by detecting potential transition points between two transportation modes as brief stops. After each segment between consecutive potential transition points is classified, adjacent segments with the same classification outcome are merged (and removing the transition point in between), and keeping only the actual transition points where the transportation modes had been changed.
The method solves the problem with noisy data, and traffic congestions which bias the indicators by using additional statistic values. The classification of gaps in the data (e.g. caused by a signal shortage during the logging of a trajectory) derived satisfying results, and segments with only their starting and ending point have been successfully classified. Thanks to the coverage of the OpenStreetMap data, in this research trajectories located outside the Netherlands (e.g. Norway and Denmark) have been segmented and classified as well.
The accuracy of the classification with the developed prototype, determined with the comparison of the classified results with the reference data derived from manual classification, is 91.6 percent. 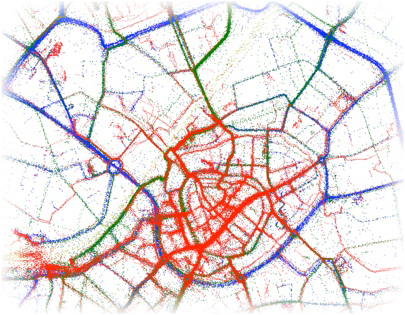 Apart from the aim of the thesis, the nature of the project and the amount of available data resulted in an endless resource of interesting plots. Some of them are published in the thesis, and are given here with a few unpublished items. 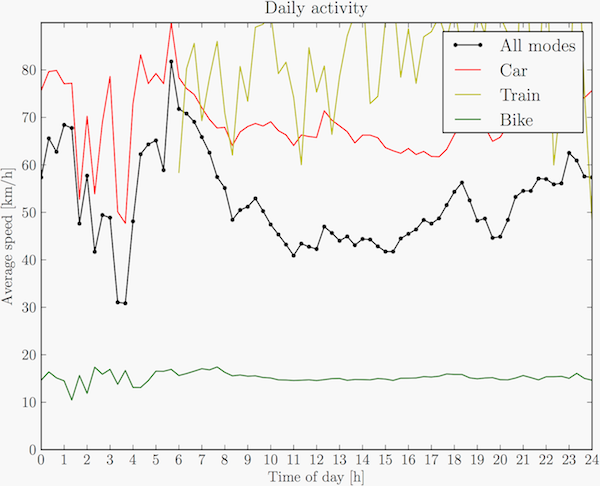 The objective of the research was to build a method which from a vast amount of movement data: 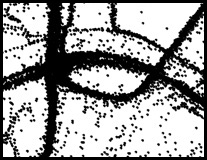 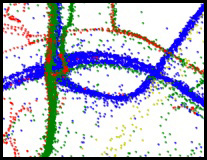 Because of the amount of available data and the classification, it was possible to generate interesting plots, some not directly related to the objective of thesis.
Next is shown a plot of the classified data in the spatial extent covering the city of Amersfoort, the Netherlands. The plot contains over a million GPS points of thousands of trips made by hundreds of people. The red colour represents walking, while green are traces from bicycles, and blue from cars. The yellow colour (slightly visible in the diagonal trajectory) represents journeys made by train. Note the aggregation of the yellow points at the two train stations in the city (upper-right corner, and the other in the lower-left). 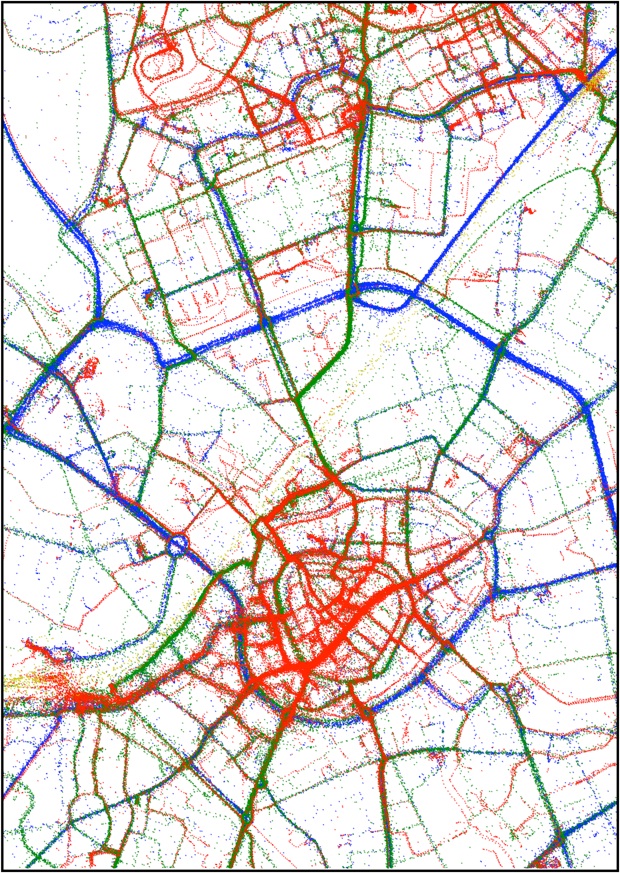 The images contain the four modes car, walking, train, and bicycle since these are the most frequently used in the Netherlands, and the inclusion of other classified modes (bus, tram, metro, etc.) is left out for aesthetic reasons. The next plot shows a larger spatial extent where the nearby city of Veenendaal is visible. The railway which runs through Amersfoort is clearly visible, as the intercity highways from the concentration of blue (car) trajectories. 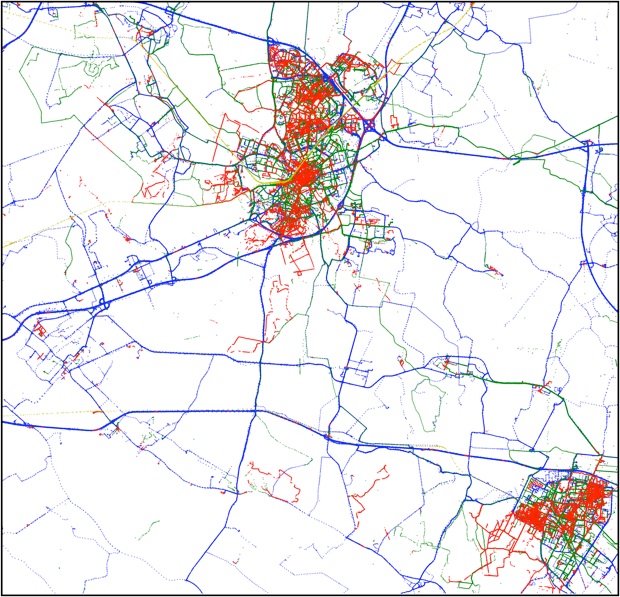 The centre of Delft is mostly pedestrianised. The bicycle paths of the TU Delft campus are also clearly visible (south-east). In wider roads it is possible to distinguish the lanes. 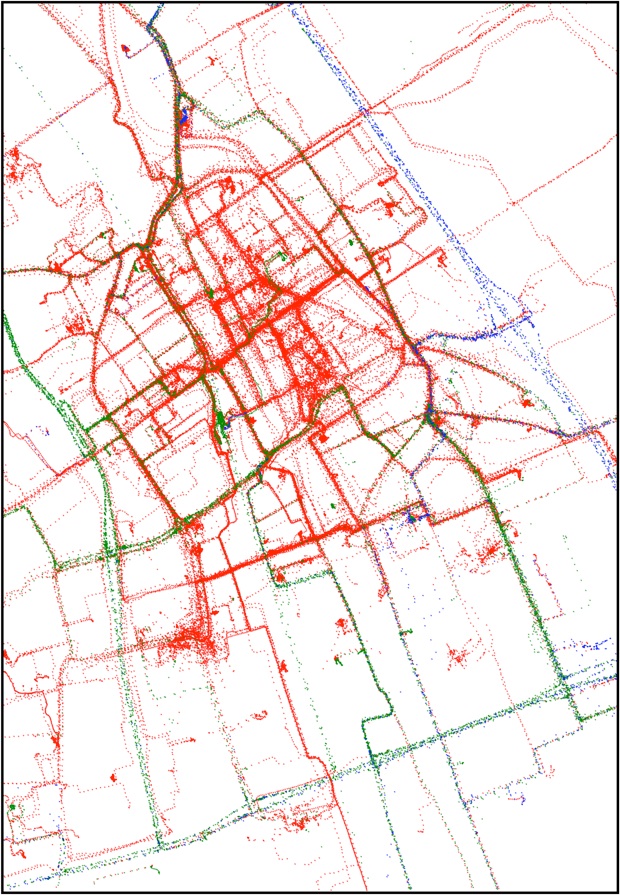 Plotting the speed of points clearly reveals the type of roads.
The speeds are in kilometres per hour. 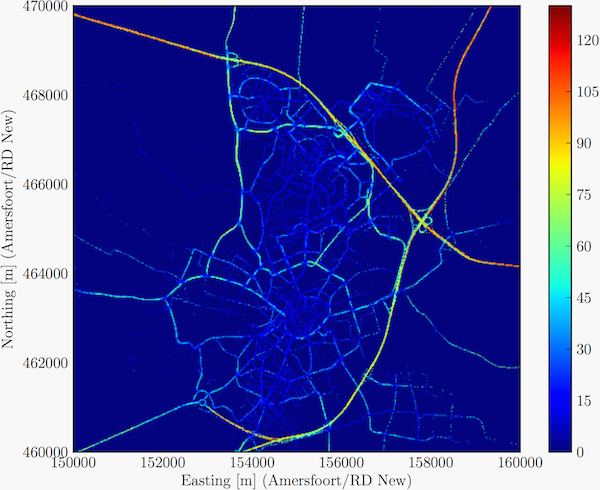 The same type of plot of a wider area (the cities Utrecht, Amersfoort, and Veenendaal can be recognised). 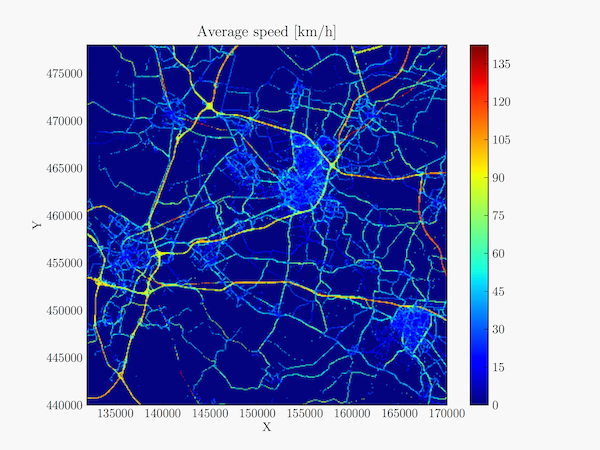 Zooming in the data is also interesting because it is possible to see the collective deceleration before roundabouts, traffic lights and similar traffic features. 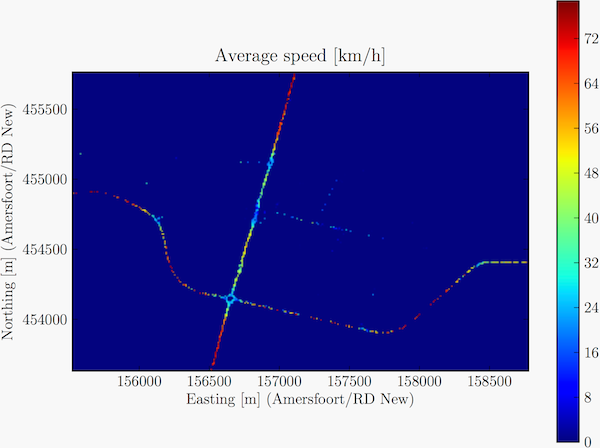 At the end of the project after the whole dataset was finally classified I generated other non-geographic plots, such as the analysis of the usage of various transportation modes over time. The peaks of general movement (black) can be found at rush hours. 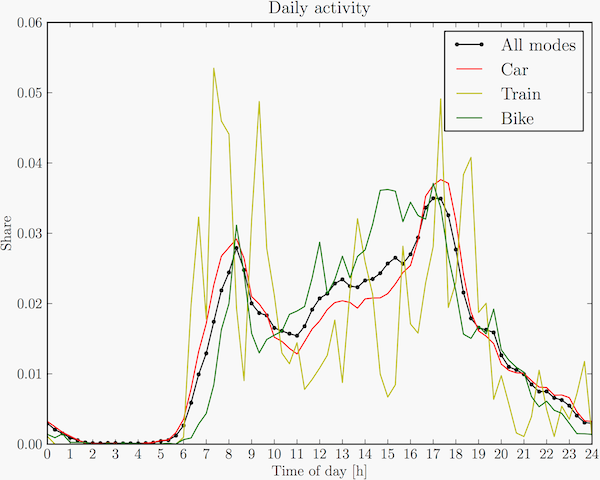 It was also interesting to examine the average speed of the frequent transportation modes (car, bicycle, train) over time of day. The sudden decrease at rush hours is due to traffic jams. The speeds of trains and bicycles are stable since they are not significantly affected by traffic jams.

The distribution of speeds decomposed for the frequent transportation modes shows interesting peaks for cars (values close to speed limits). Once again, the system classified between ten different modes, but here I outlined just three modes for clarity. 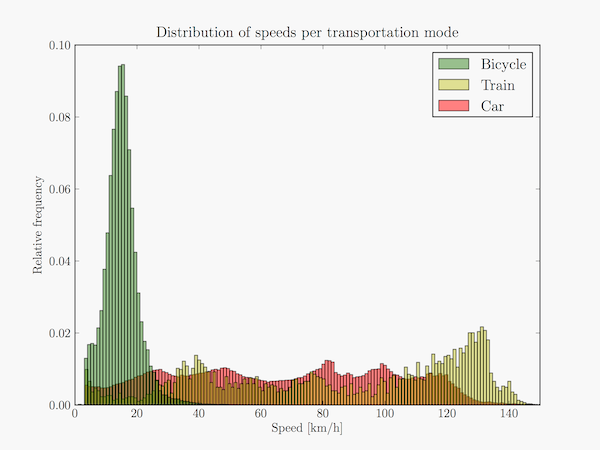 In frequently sampled trajectories the approximate speed at each GPS point was obtained in two ways: from the value directly calculated by the GPS receiver (thanks to the Doppler shift), and the distance between two subsequent points over their time difference. The latter is rather an average value of travel between two points, but since the sampling periods were frequent enough this data was good enough for this purpose.
The next plot shows the differences between these two values in a histogram (to me it looks as a Laplace distribution). 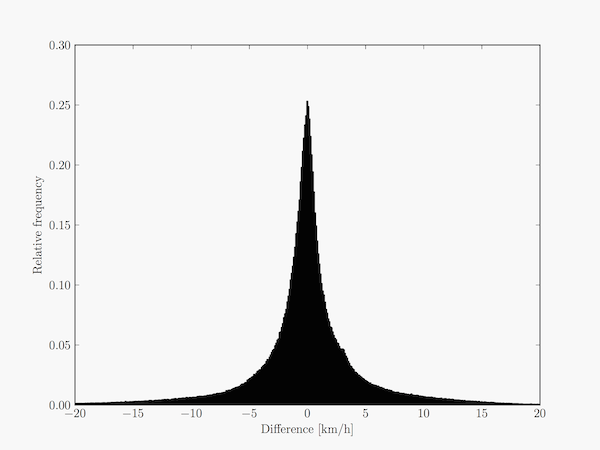 Now something different. Here is the spacetime plot (2D+time) of two similar journeys of the same person in two consecutive days (commuting + a small trip). 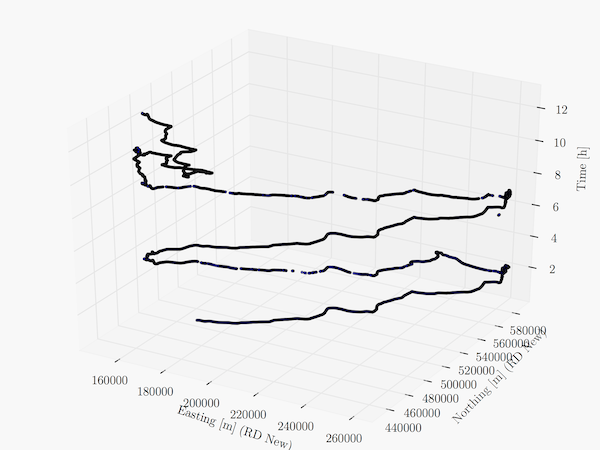 All plots had been generated with Matplotlib.
Thanks to the Section Urban and Regional Development at the OTB department for sharing the movement data that I have classified in the thesis.
Feel free to contact me if you would like to use some of the images for your needs.

Automatic segmentation and classification of movement trajectories for transportation modes